Best Things To Do in Denver Anytime 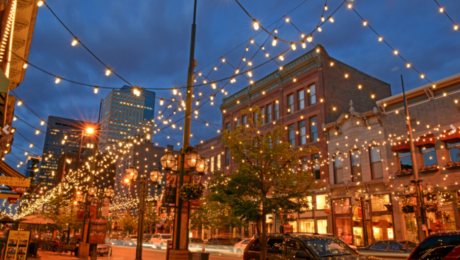 In 1858, a group of American Indians and settlers struck gold at the foot of the Rocky Mountains. Their discovery soon spread back to the East Coast, prompting people to pick up and move west. The site of the original pioneer camp (known back then as Auraria) soon grew into the charming area now known as Larimer Square. Although the city has since expanded, this historic neighborhood remains the heart and soul of the Mile High City, and according to some, it’s the place to start your Denver experience. Recent visitors attest that Larimer Square is always buzzing with life, thanks to the area’s numerous restaurants, shops and nightlife venues.

The 16th Street Mall is to Denver what Rodeo Drive is to Los Angeles. This mile-long pedestrian thoroughfare, which stretches across the southern end of the LoDo district and bypasses Larimer Square, is lined with a variety of stores, restaurants and entertainment venues, making it a popular place to visit at nearly all hours of the day (although some travelers note that the area can feel a bit dicey at night, despite a heavy police presence). Even if you’re not looking to give your credit card a workout, recent visitors recommend taking a stroll along the 16th Street Mall, as it leads to some excellent people-watching.

Denver’s Union Station is a two for one: it’s a working public transit station and a highly praised dining and shopping center. The station was a huge success when it first opened to the public in 1881, providing railroad service until the center of the building caught fire in 1894. The architecture from the 1917 redevelopment remains and today, it’s home to an Amtrak hub and a bus concourse. Located in the hip Lower Downtown neighborhood (aka LoDo), with multiple dining options and boutiques, and The Crawford Hotel, Union Station is a newfound entertainment center.

Eventism, Inc is a full-scale event production, marketing and event management company based in Denver, Colorado. With over 20 years of event experience, Eventism is a leader producing music, food and art driven event experiences...

Get our latest events sent to your inbox.